The Huntsman Challenge is an opportunity to give back and fight cancer! Undergraduate and alumni members of Sigma Chi set up team pages to engage their friends, family, and affiliated groups to fund the mission of Huntsman Cancer Institute, a worldwide leader in studying and treating cancer at the molecular level. 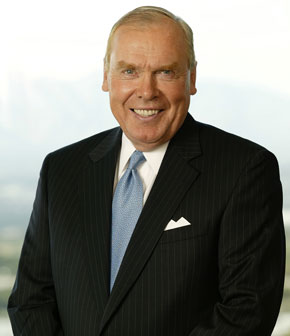 Order of Constantine and Significant Sig Jon M. Huntsman Sr., PENNSYLVANIA 1959, lived a life of service and giving back. He built a legacy on values gained through his family and his experience as a Sigma Chi to make a difference in the world. After losing his mother to breast cancer, Brother Huntsman made it his life goal to eradicate cancer from the planet. The Huntsman family donated $300 million to establish the Huntsman Cancer Institute (HCI) at the University of Utah, and because of the Huntsman family’s generosity, 100% of your donation goes directly to fund the mission of HCI.

One in two men and one in three women will get cancer in their lifetimes. Knowing that the world expects more of Sigma Chis than it does of other men, we decided to do something about it. At the 150th anniversary of the Sigma Chi International Fraternity in 2005, it was announced that Huntsman Cancer Foundation (the fundraising arm of HCI) would become the preferred charity of Sigma Chi. Ten years later, in 2015, Sigma Chi made the largest philanthropic commitment in men's fraternity history by pledging to raise $11 million for HCI. In 2019, at the Sigma Chi Grand Chapter celebration in Salt Lake City, Utah, the fraternity made an even bigger announcement: an additional $20 million pledge to HCI, bringing the total overall commitment to $31 million. To date, Sigma Chi has raised over $17 million of this incredible pledge.

HCI is a National Cancer Institute–Designated Comprehensive Cancer Center, which means it achieves the highest standards for cancer care and research and receives support for its worthy scientific endeavors. HCI has become one of the best cancer hospitals in the world since its creation in 1995.

Here are some of the breakthroughs that make HCI unique: